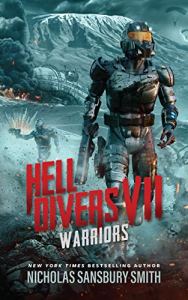 I settled down to read this next instalment in the saga of the Hell Divers, and once again was blown away into the electrical storms with their mutant creatures, human-hating machines and some seriously twisted humans. Into the world, too, of X, Roger, Mags, Michael, Les… all our old friends, along with some new ones. Dark, gritty and violent, the world of the Hell Divers isn’t one for someone with a delicate stomach – but thank goodness it’s fiction! Right?

I loved how Smith expanded the story in this book, taking his Hell Divers farther across the world than they’d been before, and facing even more dangerous threats. After all, what do you expect when you decide to take on the machines? But once again, Smith reminds us that, all too often, the true monsters hide behind human faces.

An excellent story so well told, and I look forward to reading the next one very much.

Be careful going out on a colony ship – you never know what you may find in the next quadrant over.

Having read the Fringe series, I couldn’t wait to pick this one up, especially as it stars Throttle. And my eagerness to read it was well rewarded. This book is a lot of fun, with plenty of danger and action. It was really good to get to know Throttle better and see her in action, leading her crew and caring for her colonists.

Oi, but Ms Aukes is a tricksy one! I cannot wait for the next book to come out.

I’ll be honest: I was nervous to pick up this book. Given how HD4 ended, followed up by the title and cover of this book, I was hesitant to learn what happens next. This made it difficult to get into the book to start off with. Don’t get me wrong. My issues had nothing to do with either the quality of the writing or… or perhaps they had everything to do with it. In the Hell Divers series, Nick has created a cast of characters who have become dear friends. I feel I’ve been with them through their ups and downs, thick and thin, disappointments, losses, wins. And because of this and the direction of the story – for me, at least – it became increasingly difficult to contemplate more bad stuff happening to any of them. About the only thing that gave me the courage to plough on was reports I was hearing from others who had read it.

And was that faith well rewarded! I should perhaps have trusted Smith more… Don’t be silly. I do trust him. I’m just not so sure I trust some of those monsters he invents quite as much, though! And as is to be expected, this book is packed full of all types of monsters. But it’s also chock full of good people.

Given the self-induced rocky start, once I really got into the story, it settled right down into being a classic addition to the Hell Divers’ story – aforementioned monsters and all. I’m not sure if this is one of the shorter stories in the series, but it certainly went down a treat in the end. I’m glad to have read it, and I look forward to reading more about the further adventures of the Hell Divers.

I clearly wasn’t paying attention when I picked up this book to read, as I hadn’t realised it was a GE tale. So I was delighted to discover I was in a corner of the Foundation empire, albeit a very distant, small corner. Nonetheless, this book, while focussed on Earth, retains the vastness of the GE, and so it was perfect for me.

Joseph Schwartz, in the 20th century, picks up his foot and puts it down in GE 827. Disoriented and confused, he finds himself at a farmstead among people who speak a language incomprehensible to him – as his is to them. Soon he finds himself the subject of a scientific experiment, the Synapsifier, purported to make people very, VERY clever.

Meanwhile, Bel Arvardan, an archaeologist from Sirius, arrives on Earth, intent on proving once and for all that it is the planet origin of the human race. He has his suspicions, but proof would be appreciated.

It doesn’t take any kind of degree to realise that, in Joseph Schwartz, Arvardan has the proof he’s searching for, but more problematic is the Society of Ancients, the rulers of Earth and their hide-bound prejudices – not to mention their intent on wiping out the rest of the Galactic Empire with some nasty bug they’ve developed – and other obstacles that stand in the way of Arvardan even knowing of Schwartz’s existence.

I always love a good story from Asimov, and this is no exception. I didn’t see the resolution coming, and to that I doff my proverbial cap to this master of deception and storytelling. 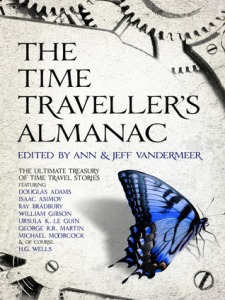 Palimpsest. Noun. a parchment or the like from which writing has been partially or completely erased to make room for another text. (link)

Stasis. Noun. a state or condition in which there is no action or progress. (link)

Agent Pierce is a member of Stasis, an organisation of time travellers who have tasked themselves with the preservation of humanity and the recording of humanity’s history. His initiation into Stasis was to murder his grandfather – effectively writing himself out of the history books. When he survives an ambush, he is contacted by a doctoral researcher he eventually marries. But things fall apart when he travels through time to the Final Library and finds no record of the time line in which he marries the researcher.

I really really enjoyed this story. It certainly was a great way to end off my travels through The Time Traveller’s Almanac. In Palimpsest Stross creates an explosive cocktail of some of the themes I love best from scifi: deep time, time travel and the time travel paradox. While this novella is somewhat complex, at the same time it’s relatively simple. I could definitely see scope for it being expanded considerably, but I also like that Stross leaves some of the story to my imagination to fill in.

Definitely a huge thumbs up to this story from this scifi fan.

All books reviewed on this site have been either purchased by the reviewers, or submitted by authors or publishers for review without charge. No compensation has been received for any of the reviews or the outcomes. Each book review is the objective opinion of the respective reviewer, and the property of the reviewer.
Follow Zhurrat Reviews on WordPress.com